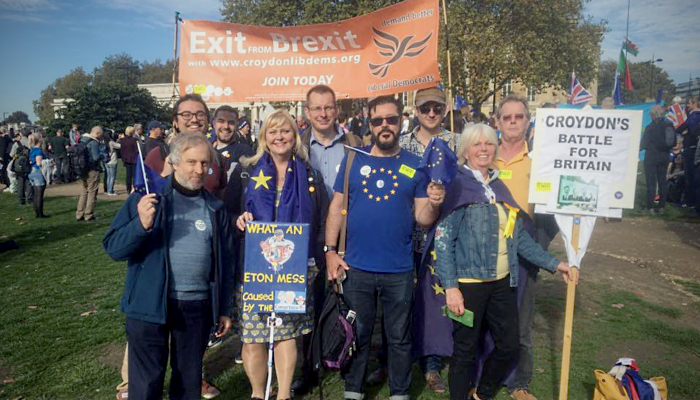 Croydon Liberal Democrat members and supporters joined 700,000 people marching in London, all calling for a People's Vote on the final Brexit deal. The march brought together people from all backgrounds and from all across the UK, and comes at a time that polls are showing increasing levels of dissatisfaction amongst the public with the Brexit process.

The referendum vote to leave the European Union gave no detail of what leaving would mean for Britain - whether or not we would stay in the Customs Union for instance, or how the issue of an Irish border would be resolved. The Conservative Party, after the referendum, have come up with two types of Brexit - a hard-line, ideological Brexit proposed by Boris Johnson and others that would extend austerity and risks the break-up of the UK, or Theresa May's Chequers compromise. Despite the Prime Minister's promises of getting the 'best possible deal' for the UK, both sides of the Conservative Party now agree that the Chequers proposals would satisfy nobody - it is simply the least bad option.

Liberal Democrats believe the best possible deal is to remain part of the EU, and that the extraordinary amount of public money and UK government time being spent on the Brexit process would be better spent on public services and fixing the broken housing market.

If, like us, you demand better than an unappealing choice between the hard-line Tories' mean and reckless hard Brexit and Theresa May's measly Chequers compromise, join a party full of people in Croydon who want to see Britain do better and join us in campaigning for a vote on the final Brexit deal.